Jenni took us to several really cool houses.  These people would build houses in hopes that the queen would one day visit them.  She usually never did.  But, I'm sure that the original owners would feel much better if they knew that me and Jenni and my husband came instead.  I mean, we're just as good as the Queen right?  No? 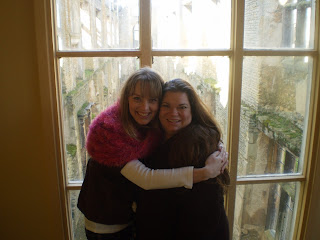 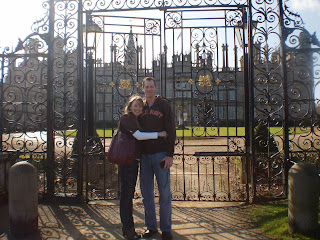 Stonehenge (below) was awesome.  The stones may not look very big in this picture but they were massive.  The reason they look small is because they were far away and my husband is a giant.  He makes everyone and everything look small.  It was cold and windy this day and due to my California blood, I was frozen. 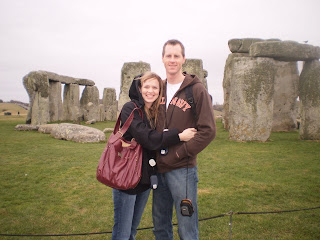 My husband likes to embarrass me.  In London he managed to do it several times.  The first was when he took a picture of me when we were in the tube (London's equivalent of the subway) like we were tourists or something.  Hello, we were riding the tube, I was trying to look cool, as though we weren't tourists and had no idea what we were doing.  The second time was the picture below where he asked a police officer, "Can my wife take a picture with you?"  Uh, yeah, thanks honey.  This wasn't the same officer that had earlier given us a parking ticket.  Oops.  (if a parking meter is covered, that doesn't mean it's free to park there, btw.  It means you have to call a secret number on a secret sign and pay for the parking with your credit card.  Who knew?) 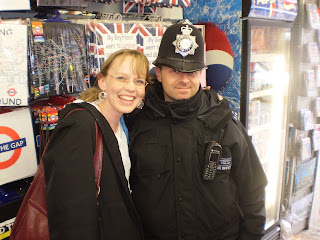 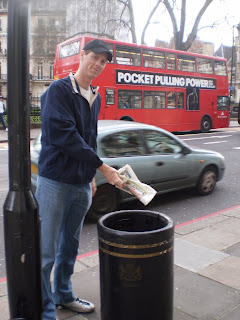 Above is a picture of the only public garbage can we saw in all of England.  It's located on Victoria Street in London in case any of you would like to throw something away when you go visit.  Seriously though, we couldn't find a garbage can anywhere.  And London was super clean, it wasn't like there was trash everywhere.  So we had no idea what people did with their garbage.  We walked around the airport for a good 20 minutes without seeing a trash can.  ???  It's a mystery.  Oh, but they have those really cool dyson hand dryers in the bathrooms.  We need some of those around the U.S.  They work amazingly well.
Anyway, overall, our trip to England was awesome.  It was beautiful and we had the most amazing hosts.
Posted by Kasie West at 1:30 PM