Maddeningly Unhelpful Advice--Creepy vs. Not Creepy

Let’s face it, kids are creepy. Okay, maybe not all the time. But when Hollywood puts them in the right situation, with the right scary music in the background, and the right looks on their faces, they scare me more than any onscreen adult can hands down. Maybe it’s because I have 4 kids of my own who can potentially turn on me at any moment. Maybe because seeing kids in those scenarios is just so unnatural. Whatever the case, kids in scary movies give me the heebie jeebies. Even scarier than pale-faced kids, bloodied kids, black eyed kids, or vampire children, are long haired little girls. You know the ones I’m talking about. Their hair hangs over all or most of their faces, hiding something truly horrible or nothing at all (we’ll never know). I’m getting to a point, I promise. I just had to set up the scenario.

So, my beautiful daughter has attained “creepy child” length hair. Sometimes when I see her from behind, I shudder. Maybe it stems back to watching The Ring. (Which by the way was a huge mistake because it made me scared of not only long-haired children, but my television set [which was the true travesty]) I’ve begged her to cut her hair for weeks now. First I told her it wouldn’t get as tangled. Next I told her it would be easier to wash. Finally I told her it would be easier to put up. None of this worked. She said she didn’t care. So the other day as I was brushing her long hair that was soon going to make her turn on me I muttered under my breath, “It’s turned to creepy child length.”
“What?” she asked.
“What? Nothing, it’s so beautiful.”
“No, you said creepy something.”
So I told her about the creepy children of film who are often portrayed with long hair. And guess what? Suddenly, she wants me to cut a few inches off her hair. What? That’s all I had to say?

So today you get two pieces of unhelpful advice:

One: Never underestimate the power of calling your 11 year old creepy. I know, I should win the mother of the year award for that one.

Anything from shoulder length to middle back on a child is not creepy. Aw, isn't she precious? And I don't even suspect any thoughts of 'taking over the world one less adult at a time' lurking in her mind. Anything from middle back to above the waist is on the creepy side. Wipe that smile off her face and she looks ripe for an attack on innocent parents or unassuming bystanders. 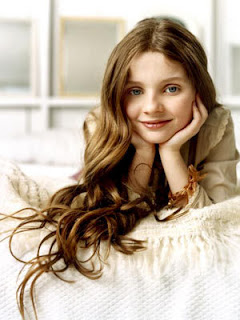 And anything around the waist or longer is just plain creepy. Scared. 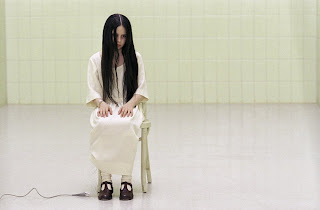 I hope that clears things up. You're welcome. :)

By the way, I know you are just dying for a bit of sage wisdom to some unanswerable questions in your own life. If you have a question that you would like answered in a future edition of 'maddeningly unhelpful advice monday' please leave it in the comments section.
Posted by Kasie West at 7:00 AM