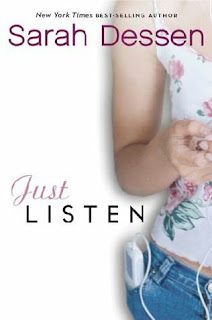 Since I liked Sarah Dessen's book I read back in October, I thought I'd give another one a shot. Although Sarah can be a bit wordy sometimes and does this odd backstory thing that I thought was just a one book thing but is apparently her style, I really do enjoy her stories. She has a way with emotions that I envy. She always has me feeling strongly whatever emotion her character is feeling. There was a part in this book that I had a lump in my throat for three or four chapters. There were other parts where I felt indignant in the character's behalf. It just drives home the point that you don't have to tell your reader how to feel by having your character describe each and every one of their emotions. You just have to let the story play out. The emotions will naturally come.

This story, like the one I read before, is about relationships. Not just the girl meets boy relationship, but mother/daughter, father/daughter, sisters, friends. They're all there and they're all developed beautifully. If you want lesson on how to develop a relationship so that it seems natural and real, Sarah Dessen is a great teacher.
Posted by Kasie West at 7:00 AM