Maddeningly Unhelpful Advice-How to become the ultimate fangirl (or boy)

Well, I'm back. I missed all of you. (And my computer which I did end up leaving at home. It was rather traumatic.) I had a blast at LTUE, though. And if I can give you one piece of adice that I learned from the conference it was: How to be the biggest fangirl ever. Take notes, people. You'll want to follow this advice closely so you, too, can make sure that your idol knows just how much you love him or her.

I will use as my example, oh....I don't know....I'll just pick an author at random.....let's just say maybe you wanted Brandon Sanderson to know just how much you loved his books. These are the things you may or may not want to do to show him:

*Make sure you attend nearly all the events he is participating in.

*Make sure you sit in the very front row at said events.

*Whenever he looks your way smile really big.

*Whenever possible, try to talk to him.

*When talking to him, ask questions such as: How exactly do you pronounce this character's name in your book (and while asking clasp your hands together and bounce up and down a bit).

*Pull one of his books out of your purse to show him which one you're reading. Put it back. Pull it out again to show him that the cover is different than the one he is selling (as though he didn't know his books had different covers). Put it back. Pull it out again and tell him you read it on the airplane. (btw, at this point he will probably ask you if you want it signed, as though he thought that's what you were hinting at when you pulled it out THREE SEPARATE times. But really you weren't hinting at that at all, you were just really nervous, but you should probably let him sign it anyway).

*Go to his reading and reception afterward where you make sure you are first in line for him to sign the book you bought while there.

*Ask him if you can take a picture with him.

Your picture may look a little bit like this: 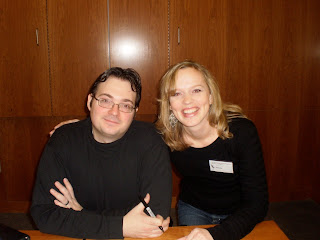 But this was just an example of what you could do. I don't know anyone who would actually do those things.
Posted by Kasie West at 7:00 AM