You should read this book: 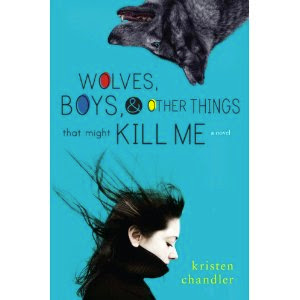 No, really, I loved it. After reading so many books lately that have the same general feel, this book was refreshingly different. The main character was probably one of the most unique characters I've ever read. She made me laugh and did so many things that were so true to her character even if I wanted to shake my head in disbelief. This girl could've walked right off the page and I wouldn't have been surprised (well, maybe I would've been a little startled, but then I would've thought, 'that's so her to walk off the page like that.') It's very clean for those of you worried about your daughter's sensitive little eyes and minds. And it's rich with relationships, emotion, and intrigue. LOVED it.

Blurb:
"When KJ Carson is assigned to write a column for her school newspaper about the wolves in nearby Yellowstone National Park, she’s more interested in impressing Virgil Whitman, the new kid in school and the photographer assigned as her partner, than in investigative journalism. But before long, KJ has a face-to-face encounter with a wolf that changes her and the way she thinks about wolves. With her new found passion for protecting these controversial animals, KJ inadvertently ignites the fuse of the anti-wolf sentiment in the community. First Virgil is injured during a town parade, and then her father’s store is set on fire in retribution. To stop the escalating violence, KJ follows Virgil to the cattle ranch of the most outspoken anti-wolf activists in town, against her father’s will. What she discovers there threatens everything and everyone she cares about.

In KJ’s fierce and funny attempt to make peace between the wolves and the people that despise them, she must first face her own long-held fears. It’s terrifying, but then, finding yourself always is." (from Kristen Chandler's website)

Happy Thanksgiving everyone. I hope you enjoy the holiday.
Posted by Kasie West at 10:41 AM