So, I've gotten more comments/emails/phone calls about my last Monday "Duck Post" than any other post before. Which makes me wonder: What is wrong with you people?!? A duck's life hung in the balance, children were in the process of being scarred for life. What was so funny about that?

Just kidding. I left out the part in my post where I was laughing so hard that my daughter threatened to throw her iTouch at me. So, yes, I'm glad we all found the situation amusing. All that matters is the duck is safe. Right? We don't have to feel bad about our laughter because the duck is safe.
Now, on to today's post.
Welcome to my new obsession: 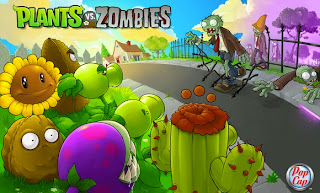 Like with most things, I'm probably late to the party. But have you played this game yet? It meets all the requirements of a great game: Plotting, Tension, and Zombies trying to eat your brains. (I know, the requirements are pretty specific so you can imagine how excited I was when I found a game that fits them.) It's awesome. You have to find the right plants to plant at the right time and in the right place that will hopefully kill the zombies before they invade your house and eat your brains. 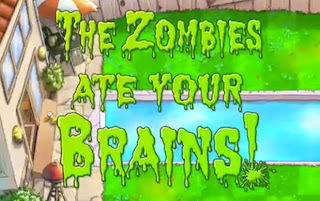 I started playing it yesterday and am ashamed to admit that I ended up playing it for nine million hours or until the battery on my iPhone ran out. My husband kept trying to look over my shoulder, saying, "What are you playing?" "Shhhh," I'd hiss, "I have to kill the zombies." An hour later, "Are you still playing that dumb game?!" This is where I would've backhanded him across the stomach for such blasphemy, but I was too busy killing the disco-dancing zombie.

So, when you are all addicted to this game, I just want you to remember who helped you on your way to being extremely unproductive. Me.
Posted by Kasie West at 8:30 AM