If you like to make u-turns, ask me for directions. Or if I am in charge of navigating, ask me a deep question....or a not deep question and you will be making u-turns in no time. Case in point. I met my dear friend, Julie, (for the first time) on this trip. 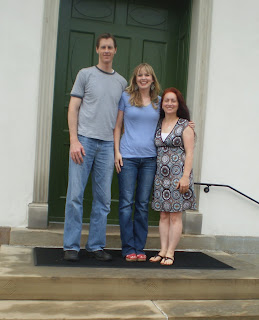 (Yes, I hung out with a lot of short, beautiful people on my trip. I almost put a pic with just Julie and I, but I thought after the last post, you might want to see how tall I am next to my husband.)

After forcing her to see lots of my church's history sights, we went out to dinner. I was in charge of navigation (which consisted of holding the iPhone and telling her when to turn). But then she started asking me questions and I got to see how good she was at u-turns.....it turns out she's very good at them.

A few days later, I was in charge of navigation again. (I know, they didn't learn their lesson). This time we were driving on a toll road in upstate New York. I told my husband to get off at a certain exit (the wrong exit). When we got to the toll booth, we told the man, 'We took the wrong exit.' He pointed to his left and said, 'Just make a u-turn right here' (where it said 'no u-turn' by the way) 'And we'll give you a new ticket.'

Okay, sounded easy enough. So my husband made a u-turn and pulled into the ez-pass lane, but didn't realize it until we were next to the booth with a car behind us. He was forced to go through it and then pulled off onto the side. We proceeded to have a lengthy discussion about what would happen if we went on our way. We (my mother-in-law and I) decided that we'd probably get a ticket mailed to us. We didn't want that. So, we got back in the lane where the nice man had told us to make a u-turn and said, 'Uh....we went in the ez-pass lane.' He rolled his eyes (probably thinking, 'stupid tourists'), laughed, and said, 'Why'd you do that??' 'Because we're stupid,' my husband said. After taking our license plate saying he could clear up the ez-pass issue (but more likely so he could turn it into the 'watch these people because they're probably going to accidentally blow something up' police) he pointed to the left again and said, 'Make a u-turn and pull into this lane, THIS one.'

This time as we made a u-turn, a lady was hanging out the toll booth window and pointing (that is how little trust they had in us that we'd do it right). I wish I had gotten a picture of that. It was hilarious.

So yes, if you like to make u-turns, or need some practice making them, invite me on your next road trip.
Posted by Kasie West at 9:29 AM