Don't forget to enter my holiday giveaway on the post below. You have two more days to leave a comment to win one of three prizes!
So last night I finished Variant by Robison Wells. 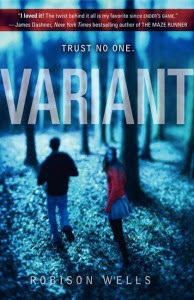 Such a great book. I highly recommend it. It was fast paced (which I love) and intriguing and kept me curious and guessing the entire book. I loved the twist and the characters and really just everything about it. Except the cliff hanger ending, Mr. Wells, you are very cruel. So of course now I'm dying to read the second one. Does anyone know when it comes out?
Amazon blurb:
"Benson Fisher thought that a scholarship to Maxfield Academy would be the ticket out of his dead-end life.

Now he’s trapped in a school that’s surrounded by a razor-wire fence. A school where video cameras monitor his every move. Where there are no adults. Where the kids have split into groups in order to survive.

Where breaking the rules equals death.

But when Benson stumbles upon the school’s real secret, he realizes that playing by the rules could spell a fate worse than death, and that escape—his only real hope for survival—may be impossible."

Sounds awesome, right?? It is.