So I've been really into reading contemporary lately. I love it so much. And one of my new favorite authors is Morgan Matson. She wrote Amy & Roger's Epic Detour (which I loved) and she also wrote this one: 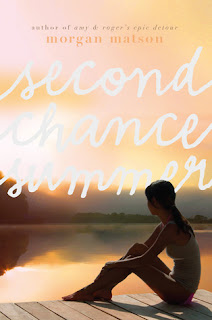 This was such a sweet read. And really emotional. It was even more emotional for me because aside from the super cute romance, it had an amazing father/daughter relationship. Having lost my father six years ago, it really touched me. I loved the relationships the book explored and I'm always a fan of summer stories. There's just something about summer that makes me all dreamy-eyed.

Taylor Edwards’ family might not be the closest-knit—everyone is a little too busy and overscheduled—but for the most part, they get along just fine. Then Taylor’s dad gets devastating news, and her parents decide that the family will spend one last summer all together at their old lake house in the Pocono Mountains.

Crammed into a place much smaller and more rustic than they are used to, they begin to get to know each other again. And Taylor discovers that the people she thought she had left behind haven’t actually gone anywhere. Her former best friend is still around, as is her first boyfriend…and he’s much cuter at seventeen than he was at twelve.

As the summer progresses and the Edwards become more of a family, they’re more aware than ever that they’re battling a ticking clock. Sometimes, though, there is just enough time to get a second chance—with family, with friends, and with love.
Posted by Kasie West at 6:00 AM