Today Transparent by Natalie Whipple is out in the world!!! I'm so excited. I adore this book. 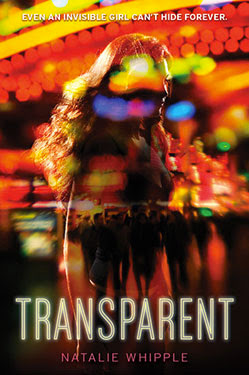 An invisible girl is a priceless weapon. Fiona’s own father has been forcing her to do his dirty work for years—everything from spying on people to stealing cars to breaking into bank vaults. After sixteen years, Fiona’s had enough. She and her mother flee to a small town, and for the first time in her life, Fiona feels like a normal life is within reach. But Fiona’s father isn’t giving up that easily.Of course, he should know better than anyone: never underestimate an invisible girl."