Paint fumes hung in the air. A constant pain pulsated behind my eyes. My neck ached. My temples throbbed. In the other room I heard my daughter coughing, but there was nowhere to go. The normal places of refuge (my mom’s house or my best friend’s place) were off limits because both my kids had pink eye, not just minor cases either, their eyes were blood red and oozing with goop.

I was trying to write, but my characters were trapped behind a layer of pain and they kept trying to hurt people in the story. My supposed “cabinet painting break” was going up in a migraine inducing cloud of fumes. I went downstairs to see how much longer he would be spraying and I came to a halt when I saw the black, industrial gas mask he was wearing. My jaw dropped. He was wearing a gas mask! And there we were breathing the poisonous air like suckers.

I whirled around and marched back upstairs, retrieved a suitcase, and packed some clothes for the night. Grabbing the port-a-crib and my kids on the way out, I checked into a hotel. My kids were excited. It was like a mini vacation. They watched television and even got to play in a hot tub. After several extra strength pain relievers, my characters finally didn’t want to kill each other anymore and I was in a much better mood too.

Apparently I was living in an alternate universe (I generally am) if I thought that a week without my kitchen was going to be a vacation. Oh well, it’s done now and I’m happy with the results. 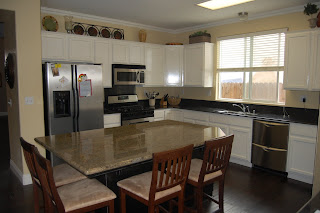