When I first realized I was going to be without my entire kitchen for one week (yes, you heard that right, ONE WEEK) I nearly had a panic attack. But as the cabinet painter started covering my oven and microwave it hit me with heart swelling happiness that I would not have to cook for an entire week. Hallelujah! No cooking equals more writing, more writing makes my heart sing with joy.

I didn't draw this, but this is about the extent of my drawing abilities. And you must imagine the big, red 'X' through it.

As for the second picture (from my last post), as individuals all of those children make my heart sing. Four of them are my own, the rest are my adorable nieces and nephews. BUT, as a collective group they are capable of mass destruction in less time than it takes for me to do .... well, just about anything. All eleven of them were at my house for Thanksgiving and the following picture shows just a portion of what they accomplished. I'm having a panic attack just thinking about it again. My house still hasn't recovered. 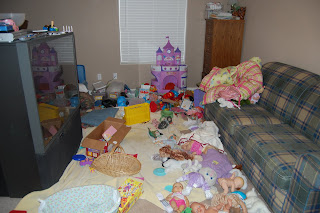 So, I guess, technically speaking, Natalie was right with her answer of "both." And since she said her answer was up for my interpretation as to what she meant by "both," that makes her even more right. :) But everyone else's guesses were pretty close too. So you are all winners. You win a nice big, "Good job! Thanks for playing. You guys are the greatest."
Posted by Kasie West at 11:26 AM