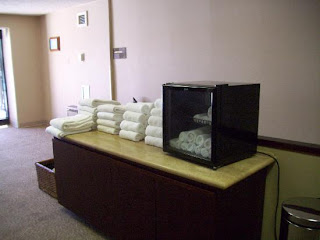 Okay, so this doesn't necessarily have to do specifically with New York, but I discovered it in New York so will now always associate the two. The refrigerated towel. Yes, it bears repeating: The Refrigerated Towel. It's heaven I tell you.

So my husband comes into the room the first night, after working out in the hotel gym, and the top half of his shirt is damp. I say, "Uh, ew. Did you sweat more than normal today?" He says, "No. There's a refrigerator in the gym and it has towels in it. Best. Thing. Ever." I say, "What's this? Cold towels?"

Now I hadn't planned on working out on my VACATION. But I figured, what the heck. I need to try these cold towels. (Okay, so I had planned on working out, which is why I brought my work out clothes, but secretly I thought that just bringing them in the "hopes" of working out would be very impressive. And then when said workout didn't actually occur everyone would say, 'well, you were on vacation.' And I would say, 'true. true. It's the thought that counts.' [when we all know in reality it's not the thought that counts because thoughts do not burn calories]) So I worked out then used a cold towel. I was glad I did because they are AWESOME! So refreshing and soothing and amazing. (On top of that I get to say I worked out while on vacation. Proceed to be impressed [It will probably never happen again])

I am now trying to justify buying a towel refrigerator. Then when people come over I can say, "Cold towel? Yes? No? Oh, okay just thought I'd ask."
Posted by Kasie West at 11:12 PM