Meet the culprits: Misti and Elizabeth (center and right in photo). They may seem sweet and innocent, but do not trust their beautiful faces and disarming smiles. They have one goal and one goal only: to kill off their unassuming friends. 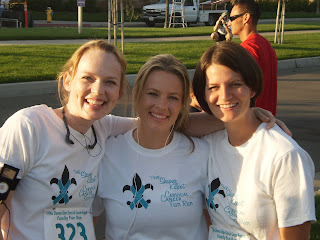 At first it may sound innocent, enjoyable even. Little do you know that you are in no kind of shape to run a 5K. The culprits try to tell you that because you’ve been doing 2.5 miles on the stair step for the last few months that you are in great shape. They try to say that running isn’t much different. You believe them at first so do not panic when you bend to the pressure and sign up a week before the race. How hard can it be, you think, it's called a "fun" run?

Reality sets in when you switch from the stair stepper to the treadmill and barely make it a mile before your side burns with cramps so debilitating that you have to stop. Your body nearly kills you again the next morning when you wake up in more pain than you’ve been in since the morning after childbirth. But you force yourself to run again that night, knowing that the 5K is coming fast and you are not only going to die, but make a complete fool out of yourself in the process.

The day of the race comes and you haven’t completed more than a mile and a half on the treadmill without having to stop and walk. That’s okay, the culprits say, lots of people will be walking part of the race. One even says there’s no way she can run a full 3.1 miles and will probably end up walking some of it as well. This thought makes you feel better.


Then the race. You put on your music hoping to drown out the sounds of your labored breathing, hoping for some form of distraction. There is no distraction. Your burning lungs tell you that you shouldn’t be doing this. The weatherman said it was supposed to be 102 degrees that day and even though it’s only 7:30 in the morning your face feels like it’s already surpassed that temperature and you haven’t even reached the halfway point. You have to stop and walk even though the culprits (or any other runners) haven’t so much as slowed down. Taylor Swift blasting in your earpieces is trying to make you happy, but failing miserably.

Eventually, through running, speed walking, and stumbling, you claw your way through the finish lines. The culprits (who have been done for 5 minutes) are already talking about a Breast Cancer run they want to do in October. You’re choking down a slice of apple a volunteer gave you at the finish line, realizing that since the culprits didn’t kill you this time, they’re already looking for the next opportunity. 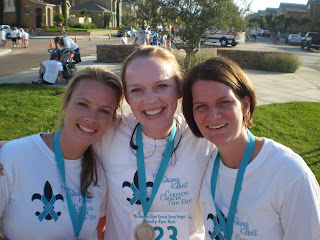 Thanks for the "fun" run, guys. You nearly accomplished your goal. :) Sarcasm aside, although the race wasn't something I'd necessarily put in my "fun" category, you two are always fun.
Posted by Kasie West at 8:52 PM