As part of joining Wolfson Literary, there is some very fine print (and by very fine print, I mean non-existent) at the bottom of the contract that states if she sells your book you have to dye a strip of your hair. It's some sort of pact with the Universe made up by some of the oldie members. (Love you, Tawna and Kiersten) I tried to tell them that I had already made a pact with the Universe. I told the Universe that if my book sold, I would drink a chocolate milk shake. Before you roll your eyes, it was going to be a really big one. The potential for brain freeze was at very high levels. It would've been a huge sacrifice. I know what you're thinking. "Wow, she is so brave to even attempt that." I know, right? But alas, my team members weren't having it. I haven't felt this much peer pressure since the downing-15-packs-of-sugar incident at Denny's when I was in High School.

But, because I love my agency sistahs. And because I don't want to anger the Universe. I will be dying a strip of my hair later this afternoon. Stay tuned for a picture.

(This is in parenthesis so nobody can see it. I'm actually super excited about dying my hair. I've always planned to do it and have known since day one the color I would use. I think it's a really fun tradition and I'm happy to be part of it.)
UPDATE:

Renee!!! What's up with this "whole-head campaign"?? Are you crazy? But maybe you should start that tradition at your agency. :)
First, let it be noted that I posed in front of my bookcase, because that's what we do.

This is me a little bit mad because it wasn't exactly the color I hoped for. There's a little too much green in this blue. 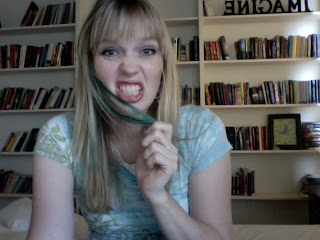 This is me proving to you that while I was at the mall getting my hair dye, I got a frozen strawberry lemonade. Mmmm, it was so good. 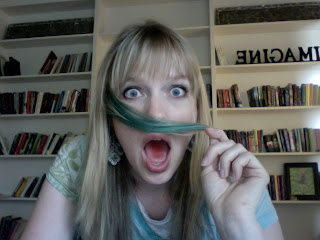 I actually kind of love it. 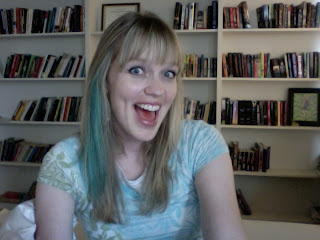 I'd also like to note that my computer camera does not capture just how bright it is (it also makes things/people look whiter than they are....what? you don't believe me?) Seriously, though, people are going to stare. It's bright. (If you click on the last picture, you can see it a little better.)
Posted by Kasie West at 9:00 AM