So remember when I told you I have an awesome friend who wrote an awesome book? Well that awesome book got an amazing cover that I love so much. I love it not only because it is just so creeptastically cool, but because it matches the feel of the book so much that it gives me the shivers.

You've probably already seen this cover, but just in case you haven't, here is J.R. Johansson's INSOMNIA cover (if this doesn't give you INSOMNIA, wait until you read the book, it will keep you up all night turning pages) 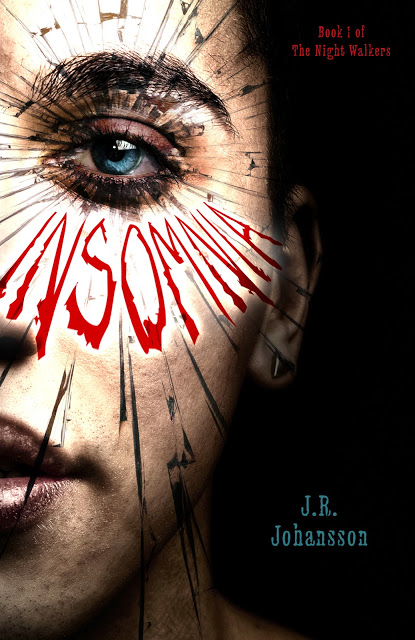 Here's what it's about:

It’s been four years since I slept, and I suspect it is killing me.
Instead of sleeping, Parker Chipp enters the dream of the last person he’s had eye contact with. He spends his nights crushed by other people’s fear and pain, by their disturbing secrets—and Parker can never have dreams of his own. The severe exhaustion is crippling him. If nothing changes, Parker could soon be facing psychosis and even death.
Then he meets Mia. Her dreams, calm and beautifully uncomplicated, allow him blissful rest that is utterly addictive. Parker starts going to bizarre lengths to catch Mia’s eye every day. Everyone at school thinks he’s gone over the edge, even his best friend. And when Mia is threatened by a true stalker, everyone thinks it’s Parker.
Suffering blackouts, Parker begins to wonder if he is turning into someone dangerous. What if the monster stalking Mia is him after all?
Posted by Kasie West at 7:00 AM