I guess, that should read Wednesday Review, not Reviews, but I like nothing if not consistency. That's not true, it just sounded good. My point is, I was only able to read one book this week. Mainly because the great highlighting edit of 2009 that took place this last week. Good news in that front is that I've definitely pinpointed the probably (well, actually, I highlighted it, but again, pinpointed sounded much better) and am now working through edits. In the mean time, my other book, the one that landed me my agent in the first place, is going to spread its wings and get sent into the world very soon. (I keep saying that, but this time it's really going to happen because I'm done shoving other books into my agent's inbox)

Anyway, on to the title of my post. My review. This week I read the book "Eyes Like Stars" 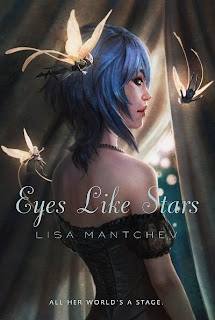 First of all, isn't that the cutest title ever? And I love the cover of the book. This book and I had a love/hate relationship. The "hate" portion was my fault and I will explain that momentarily, but let me tell you about the love portion. This book was not only charming in its prose and characterizations, but the idea was amazing. It was different than anything I have ever read. Let me quote a little from the blurb on the sleeve: "Welcome to the Theatre Illuminata, where the characters of every play ever written can be found behind the curtain. They were born to play their parts, and are bound to the Theatre by The Book--an ancient and magical tome of scripts." Lisa Mantchev not only takes you into the life of the theatre with her plot, but with how she crafts every sentence. Every line, from the dialogue to how she describes the characters speaking and moving, is like a line out of a play. I was entranced.

Now to the hate part (which is my fault). I had this longing as I read to know more about the plays she had as her "stars". Hamlet, for example, should be a play I'm familiar with, but I'm sad to say that I've never even seen the movie. So some of the lines in the book that I'm sure I should've easily understood, left me confused or grasping for meaning. As a result, sometimes I felt very distanced from the book because of my lack of knowledge in Shakespeare's plays. That's not to say you wouldn't enjoy this book if you haven't read Shakespeare. Because obviously, I enjoyed it with only a basic knowledge of Shakespeare. But I think you would appreciate her book even more (which is what I sensed as I read) if you had a love and knowledge of Shakespeare's works. So the "hate" part came when I berated myself multiple times for being such an ignoramus. I sense I will be punishing myself soon by assigning myself Hamlet to read. (It's possible I read it in High School, but like many things in High School, I have since forgotten)

Okay, my head is pounding with the cold that has been lingering around my house for the last month that I have finally caught. Plus, I have to clean for company that will be staying at my house even though I will be out of town.
Posted by Kasie West at 10:19 AM