One of my friends may or may not have informed me that even though I'm busy wallowing in self-pity, I'm not allowed to neglect my blog. I promptly told her where she could go. :) Just kidding, she's right (thank you, Julie). The real issue is that now I'm in the land of Edit-ville. And do you know what disease I get every time I go to that land? I-Suck-Itis. It's a very common disease in Edit-ville and no matter how hard I try to build up my immunity, I still manage to catch it. I want to go back to First Draft Land where I'm-a-Freaking-Genius-Itis runs rampant.

So, onto the promised review. Last week I got to read Kimberly Derting's debut novel "The Body Finder". I loved it. Can I just tell you that I'm digging on the best friend relationship dynamic and all the tension it brings when one starts liking the other. Derting pulled that off so well. If you liked the book "Shiver" I think you would like this book. 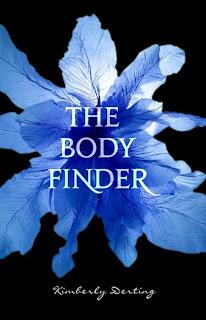 "Violet Ambrose is grappling with two major issues: Jay Heaton and her morbid secret ability. While the sixteen-year-old is confused by her new feelings for her best friend since childhood, she is more disturbed by her "power" to sense dead bodies—or at least those that have been murdered. Since she was a little girl, she has felt the echoes the dead leave behind in the world . . . and the imprints that attach to their killers.

Violet has never considered her strange talent to be a gift; it mostly just led her to find dead birds her cat left for her. But now that a serial killer is terrorizing her small town, and the echoes of the local girls he's claimed haunt her daily, Violet realizes she might be the only person who can stop him.

Despite his fierce protectiveness over her, Jay reluctantly agrees to help Violet find the murderer—and Violet is unnerved by her hope that Jay's intentions are much more than friendly. But even as she's falling intensely in love, Violet is getting closer and closer to discovering a killer . . . and becoming his prey herself."
Posted by Kasie West at 11:38 AM