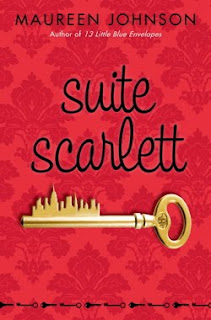 "Scarlett Martin has grown up in a most unusual way. Her family owns the Hopewell, a small hotel in the heart of New York City. When the Martins turn fifteen, they are each expected to take over the care of a suite in the once elegant, now shabby Art Deco hotel. For Scarlett’s fifteenth birthday, she gets both a room called the Empire Suite, and a permanent guest named Mrs. Amberson. Scarlett doesn’t quite know what to make of this C-list starlet, world traveler, and aspiring autobiographer who wants to take over her life. And when she meets Eric, an astonishingly gorgeous actor who has just moved to the city, her summer takes a second unexpected turn." 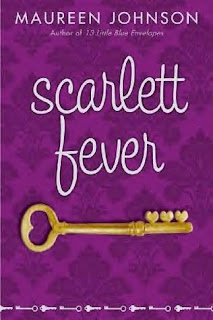 "Ever since Mrs. Amberson, the former-aspiring-actress-turned-agent, entered Scarlett Martin's life, nothing has been the same.
She's still in charge of the Empire Suite in her family's hotel, but she's now also Mrs. Amberson's assistant, running around town for her star client, Chelsea - a Broadway star Scarlett's age with a knack for making her feel insignificant.
Scarlett's also trying to juggle sophomore year classes, her lab partner who is being just a little TOO nice, and getting over the boy who broke her heart.
In the midst of all this, her parents drop a bombshell that threatens to change her New York life forever..."

Maureen Johnson is so good at bringing her characters to life that, did I not know any better, I would think they actually live in an old hotel in New York. I'm always impressed by people that can take every day situations and completely entertain me with them. And Maureen is an expert. She is also an expert at relationships. It's not many people who can make me care more that the sister and brother make up after a fight than the main girl and love interest. And she does just this. My stomach hurt when poor Scarlett was fighting with her brother in book 1.

These books are fun, smart, and a great read.
Posted by Kasie West at 8:34 AM